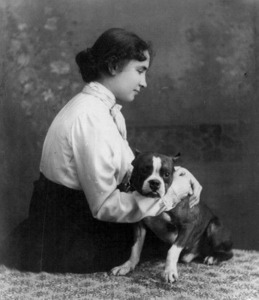 Helen Keller with her Boston Terrier "Sir Thomas" AKA "Phiz" (1893) 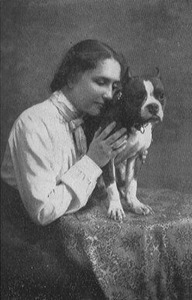 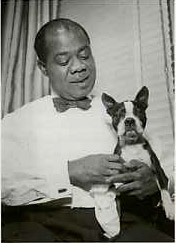 Louis Armstrong with his Boston "General" 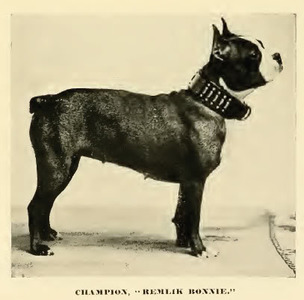 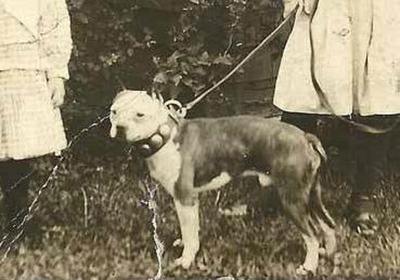 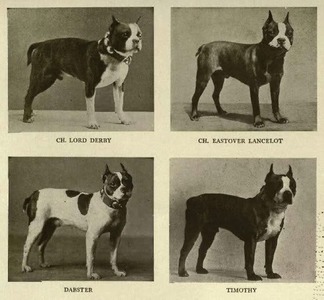 Boston Terrier's from the early 1900's

The Boston terrier has bulldog origins

Originally bred for fighting and tenacity, in the long history of the breed these traits have been largely bred out, and today’s Boston terriers are friendly, affectionate small dogs, which are actually around half the size and weight today of the original dogs of the breed!

Named after his city of origin—Boston, Massachusetts—the Boston Terrier is as American as apple pie and baseball. In 1865, Robert C. Hooper, a resident of Boston, purchased an English Bulldog–white English Terrier cross from William O. Brien. This mixed-breed dog, with his dark brindle color and white blaze, became known as Hooper's Judge.  Judge was larger than the Boston's you see today as he weighed in around 30 lbs.  He had a white blaze and throat, cropped ears, and a screw tail.

They are often confused with the French bulldog

The French bulldog is another small, flat-faced and reasonably muscular breed that shares a lot of physical similarities with the Boston terrier, so much so that they can be hard to tell apart if you don’t know what to look for!

Because the French bulldog is another derivative breed with English bulldog ancestry, this makes a lot of sense!

They were the first breed formally developed in the USA

While a lot of dog breeds have been developed, created and advanced in the USA, the Boston terrier is actually the first breed that was formally developed and registered in America first of all.

The origins of the Boston terrier have been pinpointed to the 1870’s, when an English bulldog was deliberately bred with a white terrier for the first time, and this proved to the formation of one of the most popular breeds of dog in the world today!  They were initially called "Round-headed bull and terriers", Short "Round Heads", or "American Bull Terrier".

As pit fighting became less popular, the breeds structure started to change and become much smaller & refined in appearance.  By the 1950's they most resembled the Boston's that we know today.

The Boston terrier is a brachycephalic dog, which means that they have a short muzzle and flat face. As well as giving dogs of the breed their distinctive appearance, the brachycephalic muzzle can also lead to some potential problems as well-Boston terriers (and other brachycephalic dogs) are less well able to regulate their own body temperatures, particularly in hot weather, and so special care should be taken when the weather is hot.

Additionally, the muscular head and neck of dogs of the breed means that Boston terriers do not tend to be strong swimmers, and some cannot swim at all, because the weight of their heads tips them forwards when they are in the water.

As well as having short muzzles and flat faces, the Boston terrier’s head is proportionally large for their bodies, and they also tend to have rather wide necks. This, combined with the sloping, narrow hips of dogs of the breed means that Boston terriers usually need to be delivered by caesarean section, as it can be difficult or even impossible for French bulldog bitches to give birth on their own.

This means that breeding from Boston terriers needs to be carefully planned and also, the cost of caesarean delivery is also usually factored into the sale price of puppies of the breed.

They come in a huge range of colours and patterns

The Boston terrier can be seen in a huge range of different colour and pattern variations, and there is no one colour or pattern combination that is considered to be more common or desirable than the others-but a great many Boston terriers have brindle in their coats somewhere or other!

While the Boston terrier is a very popular dog breed with a strong following of fans and enthusiasts who like to show them and work with them, a Boston terrier has never won the prestigious Best in Show title at Crufts, in the entirety of the show’s long history! 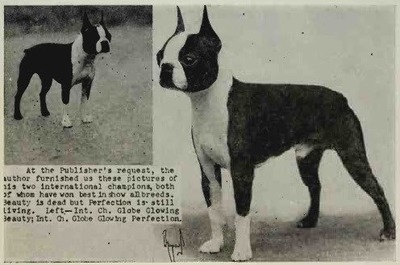